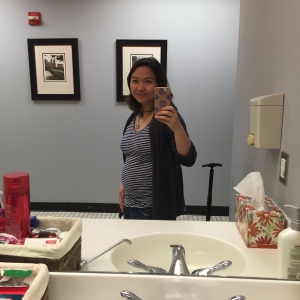 I never thought I’d be a mother. It’s not that I never wanted to have a baby. I just never fully believed I could be a good mother. Since I was young, there had been signs: I had cut my younger sister’s hair all wrong, I had dropped my toddler cousin, I had given up on caring for my rabbit after it chomped my finger… Up to now, I still detest cleaning up, I still feel awkward around children and I still fear the limitations that come with being a parent.

So why am I now having my first ever Mother’s Day? Because I knew that compared to all these doubts, the regret from not even trying to have you… will be so much greater and will most likely be too unbearable.

People say one can never really be absolutely ready for a baby. I agree. But that won’t stop me from hoping that when you come out into this world, I am the strongest mother I can ever be.