At least 9 out of 10 times, when told in the Philippine/Filipino setting that you are getting/being “fat” or “big” there is no clear communication of the commenter’s intention e.g. I am letting you know because I’m concerned about your health OR I am sharing my unsolicited observation because I don’t think you’re self aware OR I’ve been through what you’re going through and I’m now about to drop some knowledge on you OR look at my ability to maintain my figure and look at you OR the worst unspoken and most often assumed implication: I think your weight makes you look ugly.

I’ve always felt strongly about this so for those hearing it from me for the first time:

Through the years I’ve gotten less and less comments about my weight. Not because I’ve been able to fit people’s standards but more because I don’t want to take sh*t anymore. If you are one of these people still giving away these amazing sh*t comments – please stop. I swear it’s the right thing to do.

I’m 33 today. I got a few wrinkles, permanent eyebags and white hairs hiding among the purple.

Age is just a number. Apart from my looks, questionable health, being sleepy at 9pm, I do feel younger. Maybe it comes from acting too old for my age in my youth. My mother did tell me multiple times that since birth, I have always been in a rush to get ahead. I was originally due on Christmas Day.

I watched too many Calvento files and Days of Our Lives episodes as a kid. I may have started liking boys at too young an age.

I became competitive with my studies, quiz bees, sports, research contests, joining the next cool company. In many ways, I’ve felt like I was pushing myself to do things an older wiser person would do.

Then, my body started feeling older. I got hitched. I have a kid. The universe doesn’t $@#*% slow down. Thank goodness my experience with anxiety and depression taught me this cool trick of focusing on what I can control.

I feel younger because I’ve learned that I may not be able to stop time and &@$! hitting the fan but I can choose to slow the $@#*% down. 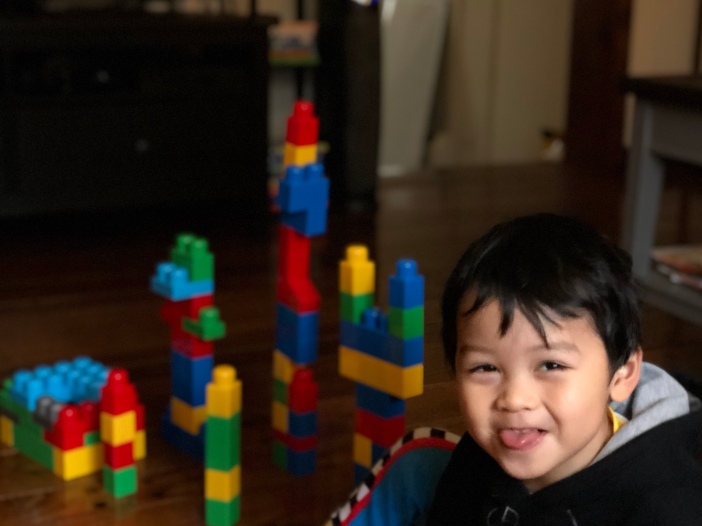 It’s been a long time since I wrote.

Truth is, I’ve been overwhelmed. By a career path I’m good at but don’t love. By a dream I need to pursue even if it means facing the truth that I’m not good at it and may never become better at it. By being away from you, physically, mentally, emotionally. By recurring health issues in mind and body.

I’ve had a rough past year. I’ve made a lot of drastic changes but I’m still adjusting. One of the changes: stay at home to care for you full-time.

I thought I’ve had some challenging roles. But this is the hardest role I’ve had thus far. Every day, I’m still winging it. Sometimes, I feel so blessed I get to spend so much time with my sweet, smart, talented child whom I love with all my life. Other times, I wonder: what the hell was I thinking? What made me think I could handle this level of responsibility?

Over the last few weeks, I’ve realized – I’ve forgotten how to play. As a child, I used to play pretend with my sisters all the time – with or without toys, inside or outside. I played multiple characters – protagonists, antagonists. I developed exciting plots – tons of humor, action and drama. Then, I grew up… got busy with school then work then life and slowly, I forgot.

I’m not sure when I’m going to find things easy, I’m not sure if I ever will. I can’t promise to always be fun and not have any down days. You will likely still catch me off guard when you ask, “Mama, what are we doing today?”

I will never be perfect. But for you, I’ll keep learning and re-learning. I’ll keep working to find balance. To care for myself, too, so I can be my best at caring for you.

I love you. We’ll figure this out together!

When I was a child, I believed that I was beautiful – both inside and out. I wanted to compete in a popular pageant for young girls called “Little Miss Philippines” on a noon time variety show called “Eat Bulaga.” For some reason, I knew in my heart that I would crush it but I wondered why no one really advocated for me to join. That’s when it started… Between 5 and 7 years old, I began to question if I was seen by others as beautiful.

Fast forward to high school. Again, I found myself yearning to be nominated for a chance at the school beauty pageant. I waited for four years to be asked if I was interested but nothing happened. This was when it dawned on me – I just physically did not fit traditional standards of beauty.

It was also in high school that my self-image began its journey into distortion. For the first time in my life, I was told that I could be skinnier. So, at some point, I skipped lunch for a year to lose weight. Somehow, I started associating beauty with skinny (unfortunately, media and Philippine culture do too much to reinforce this). I was miserable and yes, I did stop believing I was beautiful.

Then, through college and through my first jobs, people kept telling me: I was gaining weight, I was getting fat. Even if my boyfriend (now husband) and best friends kept telling me I looked great, guess who I listened to? Guess what I saw every time I saw my reflection or looked at a recent photo of myself? I saw myself as overweight and unattractive.

The funny thing is… whenever I look back at those older photos now, I get so confused – why were people calling me fat? Why was I so convinced that I was fat? More importantly, why did it matter so much? As an example of what I mean when I say distorted self-image, take a look at the pic collage below. From the 4th photo onward, I’ve looked at each photo in the past and thought I looked fat due to either some feedback from the time or my own corrupted view of myself and yet, when I see these pictures now, I think: my BMI may not have been perfect but how come when I looked at these in the past, all I saw was weight I had to lose?

After giving birth, breastfeeding helped keep the weight off for a few months. Then, my milk supply ran out and soon, I became the heaviest I’ve ever been in my life. Except this time, losing weight is physically and logistically not as easy.

I’ve been avoiding posting pictures of myself. If I do post something, I carefully choose what makes the cut, fearful that I’ll be judged. I have deleted comments about my weight before.

I’m trying really hard to lose weight again. And this time, I want to do it not to avoid getting hurt by what others think or say. I want to do it for health reasons and without regard for how skinny society wants me to be. Whether or not I succeed, I want to feel beautiful again. Deep inside, I know she’s still there – the little girl who loved and believed in herself enough to think she can win “Little Miss Philippines.” I have to find her. Because no one else can advocate for me better… than me.